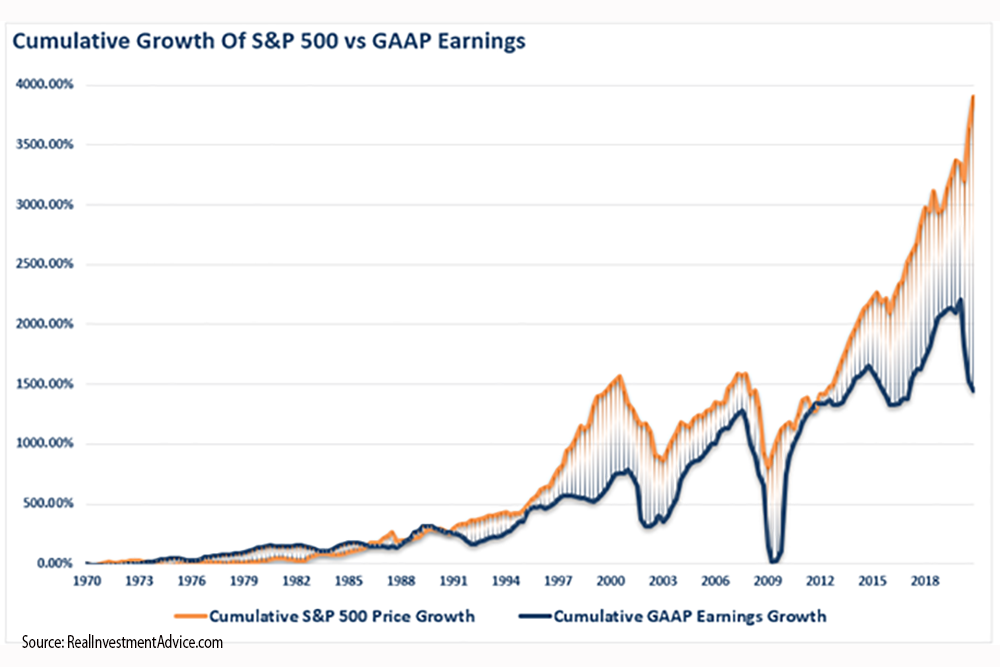 -The Good, The Bad and The Ugly-

This graph highlights the stark dichotomy between what investors view as “good” and “bad” on the current investment landscape. The tan line traces the cumulative growth of the S&P 500 over the past half century. Most noteworthy is the explosive growth in the nearly dozen years since the end of the Financial Crisis. By contrast, the blue line shows how severely corporate profits were impacted by 2020’s pandemic-induced recession. Never in the half century covered here has the difference between stock prices and underlying profits been so profound.

While corporate profits may be the best indication of economic strength, investors focus on a great many factors in making their investment decisions. The following paragraphs present an inventory of positive and negative issues currently affecting the economy and securities markets. The negatives significantly outweigh the positives because, for more than a decade, the government has prevented natural cyclical corrections that would have eliminated excesses built up in traditional business and market cycles. Doubling down on that success, the government introduced unprecedented stimulus to lift the economy out of the painful early-2020 recession. At least in the short-term, stock and bond market strength provides powerful evidence that positive factors outweigh the more numerous negatives. The question remains open as to whether positives can continue to prevail over longer periods of time.

While a number of these factors may ultimately lead to negative results, they are currently on the positive side of the ledger, because they have led and continue to lead to at least near-term favorable market and/or economic results.

Warren Buffett’s favorite valuation comparison is an especially valuable tool. Market capitalization compared to the size of the economy typically is an excellent approximation of the average of all major traditional valuation measures. The study goes back to the mid-1920s and currently shows the equity market to be more overvalued than at any other point in 95 years. Past equity markets have suffered hugely negative outcomes from every prior major valuation peak, even from less overvalued levels than today’s. From the next three highest peaks of overvaluation, the S&P 500 declined by 89%, 50% and 57%. In those three instances, it took 25 years, 16 years and 11 years respectively for the S&P 500 to again reach its prior peak. The vast majority of investors would be unwilling to wait that long.

One of the most widely applauded features of recent government financial rescue programs has been the bailing out of companies otherwise financially sound but whose survival was endangered by the pandemic. Unfortunately, the programs have also rescued a large number of zombie companies. These are defined as companies not earning enough even in non-pandemic times to cover the interest on their outstanding loans. A recent study showed that at the end of the third quarter, 26.2% of Russell 3000 companies experienced three-year pre-tax earnings before interest expenses in negative territory. Eventually, companies with that profile may no longer be rescued, and investors who have not done proper research may suffer significant losses.

In recent years, algorithm-driven machines trading with other machines have dominated equity markets. Because the machines have learned most of their market history in the past few years, they may be susceptible to making major trading errors if prodded by a factor such as sharply rising interest rates — unseen in recent years. Programs that protectively sell into weakness could flood the market and decimate prices, as portfolio insurance did in 1987. There is potentially much bigger algo-driven volume today, and the exit doors are not nearly wide enough.

Perhaps most frightening is Boston Fed President Eric Rosengren’s speculation that the Fed may at some point turn to purchasing equities to try to avoid or lead the country out of recession. Besides further exacerbating the income and wealth divergence between rich and poor, such an action would destroy any remaining semblance of free investment markets in this country. The Fed has gone well down the road already in eliminating free domestic markets, but that’s a subject for another day.

What do we do with all these good, bad, and ugly conditions? Of course, that answer may vary from investor to investor based on age, circumstance, and investment objectives. And individuals’ level of confidence or fear in large part varies based on recent investment experience. In this country, confidence is highest among those who were willing to accept the risks attendant to owning stocks like the Elite Eight, which led the S&P 500 to an 18.4% return in 2020, bouncing back powerfully from the 35% decline in the spring. Not so heavily affected by the handful of super-high-valuation market leaders, the New York Stock Exchange Index, which includes all stocks trading on that exchange, produced a far more modest 4.4%, having been in negative territory for a major part of the year. Eliminating the US from the equation, the World ex US index edged into the black near the end of the year with a meager 1.1% return.

After more than a half century of work in this industry, I confess to having a powerful bias toward outcomes that I have personally watched unfold without exception over the decades from substantially overvalued conditions. Since the consistent behavior of stock prices reverting to historically normal relationships to their fundamental means goes back even much farther than what I have experienced, I accord that expectation a very high level of probability. There still exists a crack for the unprecedented to sneak in. At the broad systemic level of this country’s stock market principles and practices, it has always been a loser’s wager to bet that “It’s different this time,” although that belief has been fervently held by every generation.

It is possible that the Federal Reserve and other governmental agencies have already gone so far as to be unable to pull the country back to historically normal levels of debt and to adopt a hands-off approach to the nation’s equity markets. Should that realization come to guide future action, there would be a possibility that the government would so pump up the money supply that stocks, real estate and most everyday goods and services might be raised to new normal levels. Such action, however, would have monumental effects on the world’s financial system and would cause massive dislocations. It, therefore, remains a low probability, though not zero. I hope to write more on this in time.

Potentially, we never go back to historic normalcy. The stock market’s eventual experience of reversion to the mean, however, is overwhelmingly the most likely outcome.
If reversion to the mean is most likely, it’s hard to understand why equity investors — traders excepted— are willing to spend more than twice what is normal relative to underlying equity fundamentals in light of expected lower than normal economic growth domestically and internationally for several years, after an initial strong, but brief, bounce back. Perhaps the dominant assumption is that investors should continue to ride the Fed and a new Democratic Congress without regard for underlying fundamentals. That assumption is historically problematic, but has been successfully practiced since the government seemingly took as a mandate eleven years ago to protect markets from all potentially significant declines.

Let me close with words of wisdom from a few of the world’s most successful investors over the past several decades. Having long ago abandoned portfolio management, Jeremy Grantham, co-founder of GMO, penned Waiting for the Last Dance earlier this month. In it, he described the current market as “… one of the great bubbles of financial history, right along with the South Seas bubble, 1929, and 2000…. for the majority of investors today, this could very well be the most important event of your investment lives.” He went on: “The one reality that you can never change is that a higher-priced asset will produce a lower return than a lower-priced asset…, and the price we pay for having this market go higher and higher is a lower 10-year return from the peak.”

Mohammed El Erian, former manager of the Harvard endowment and former co-CIO of PIMCO, recently identified the question he asks himself whenever he makes an investment decision: “Is this a mistake I can live with?” In a similar vein, Arthur Cashin, head of floor trading for UBS and one of the very best market historians, has often offered counsel that we should heed in virtually all aspects of our lives. He says that when he goes into a room, he always looks around to see where the exits are. That may be especially wise advice for all of us today, as we face highly uncertain health, economic, and market conditions.